My Back Is Safe Again

During the recent months, I had a back problem.

I had a comfortable chair and I had no problems when working at my desk. However, when I went to sleep, my back started to hurt immediately when I went to bed. Not very much, but it was uncomfortable and slightly alarming to experience this almost every evening.

For Christmas I got that big inflatable ball to sit on. The back pain went away, and I mean immediately.

Several weeks later, Kryspin used his lightning-fast claw to destroy the inflated balloon in 0.01 seconds (while I was sitting on it) and my back started hurting again.

With Kryspin out of the way, I could've used the inflatable ball again but I found something more stylish:

These special Spinalis chairs emulate the effect of inflatable sitting balls but you look a lot less like idiot when sitting on them. Again, all the pain disappeared immediately.

As you can see, you can order them from Slovenia but if you are from the Czech Republic, you can visit the Czech dealership and try sitting in the chairs before you order (it takes several weeks for the chair to arrive).

Note that the Czech dealership is not a shop in the classic sense. You have to make your appointment in advance, either through web form or using the phone number listed on their webpage.
Posted by František Fuka at 01:03 9 comments

I have a feeling this will not work as planned. Am I wrong?
Posted by František Fuka at 22:45 7 comments

George Takei Sticks It To The Man

Posted by František Fuka at 23:45 2 comments

Plugoo is exactly what I've been waiting for for a long time. You register at their site, you get a small HTML snippet you insert in any webpage and, as a result, anyone visiting your webpage will see a miniature IM console which he can use to communicate with you. You see his messages as a standard messages in your favorite Instant Messenger and you can reply to them from your standard Instant Messenger.

Of course, anyone can choose any nickmane and there's no guarantee that the nice "SexyFox21" user today is the same "SexyFox21" as yesterday...

It requires Flash to be installed and the only downside I can see at the moment is that it doesn't support Czech characters. You can see it being tested at my homepage.

UPDATE: Only one person can talk with you using Plugoo at any given instant! It's rather logical, because all messages come to you from user called "Plugoo" and if you'd talk with two people at once, the server would have no idea to whom you are responding. Bear that in mind if you have really busy website...
Posted by František Fuka at 14:01 7 comments

What do you get when you cross Monty Python with Nigerian scam? There are no words to describe this...

(Note that there is no point in watching this unless you are fairly familiar with both Monty Python and "Nigerian scams".)
Posted by František Fuka at 21:56 5 comments

The Shocking Truth About That Nice Girl

For all the authors of riotously funny comments under this post: The fact that I posted that girl's photo here should be pretty good indication that I didn't end up in bed with her. She is 21 years old, she smokes and she has a boyfriend.

On the other hand, this girl (whose name or face you'll never know) is 19 years old, which still doesn't mean that I am a paedophile. It's just that, mentally, I probably still haven't left puberty and living through puberty while having knowledge and body of 38 years old person is kinda cool. Mostly...
Posted by František Fuka at 23:35 12 comments

Walking Around Prague - And I Mean AROUND!

Because no one bought me the fitness equipment of my dreams I had to resort to other crazy ideas today.

I was invited to "Trpaslicon", which is a convention primarily for fans of Red Dwarf TV show and other kinds of British humor (I still have no idea why they invite me each year because I don't watch Red Dwarf at all, I just tell them interesting stuff about upcoming films). Because the weather was nice, I decided I will walk there. From Vysočany to Litochleby. If you have Google Earth installed, just click here to see the path I took around the eastern edge of Prague city. With dogs, of course.

I relied on my GPS and on the vague idea that there is a highway going in the approximate direction of where I want to go. However, highways are not always the best terrain for people walking with dogs so I had to solve many interesting logistical problems on the way! It was about 8 kilometers by air, probably about 12 in reality. My legs feel good.

This reminds me of much more crazy route I took 12 years ago. Back then, I wanted to get from Šenov Film Festival home to Prague, the weather was super-nice and I decided I'll walk for a while and then hitch a ride. I started shortly after lunch from Šenov. However, when I decided I'd rather not walk any longer, no one wanted to pick me up. Of course, as the dusk approached, the chances of being picked up decreased more and more. I didn't want to use train or bus, I just walked on and on, hoping that someone will have mercy.

In the end, I was picked up by some good soul at 5 AM the following day, near Mělník. Yep, that's about 80 kilometers walk. Needless to say, during the following few days I really understood what "doesn't feel his legs" means.

UPDATE: If you understand Czech, you should definitely read this!!!
Posted by František Fuka at 23:03 5 comments

Shouldn't You Drive a Taxi Instead of Reading This Blog?

I swear this happened between me and an unconspicuously looking taxi driver today (it was in Czech, of course):

Taxi driver: "Have you seen that new Fabia? Bitchin!"

Me: "I know it's a model of car but you really didn't pick the right topic for this conversation, as I am not even sure which pedal does what in a car. If you want, I can talk about movies or computers with you."

Taxi driver: "Oh yeah, I've done some IT shit some time ago but about the time they released Linux Kernel 2.2, I said fuck it, there is no money in this, and started driving a taxi."

Also, he played the games I wrote for ZX Spectrum in the 1980s.

On a different note: This is how unknown girls whom I get heart-shaped lollipops from look like, which means I am probably luckier than most of you (but not lucky enough).

And that's all I'll say about that.
Posted by František Fuka at 02:15 19 comments

Thanks to Windows Vista speech recognition, the programmers no longer have to use their hands. They can just relax in their comfy chairs and dictate their programs. Look how easy it is:

Posted by František Fuka at 23:31 7 comments

When two people do the same thing, the results can be wildly different:

I found a nice little multiplayer online strategy game called TinyWarz. It's played directly in your browser and doesn't use Flash, just HTML and some Javascript tricks. And yet, it has graphics - which can only be described as "cute" (and makes me wonder if they couldn't make a client for playing it on mobile phones).

Yes, it looks deceptively simple but in fact it's extremely complex and you don't stand a chance to even start the combat unless you read the tutorial. It's "sort of" realtime - you play it in turns and you have time limit for each turn. Also, for the beginners, I recommend landing on "Beginner" planet where other players cannot kill you and you can try killing pirates.

The playing is free but - as usual - you can pay real money to get more turns, better weapons etc...
Posted by František Fuka at 00:14 1 comments

Met her. Helped me with picking new glasses. Gave her lollipop. Likes the same movies as me. Is cute. Reads Kafka. Reads this blog! Sense of Deja Vu. Has boyfriend. Hello there, L.!
Posted by František Fuka at 01:37 11 comments

Labels: life
Email ThisBlogThis!Share to TwitterShare to FacebookShare to Pinterest

About 18 months ago, I blogged about great boardgame called HeroScape. It's excellent compromise between "Looks great", "Does not insult intelligence of professional boardgamer" and "Can be played even by his young sister". Today, I can inform you that you can buy it in the Hras shop in Rokoko Passage in Prague at last! 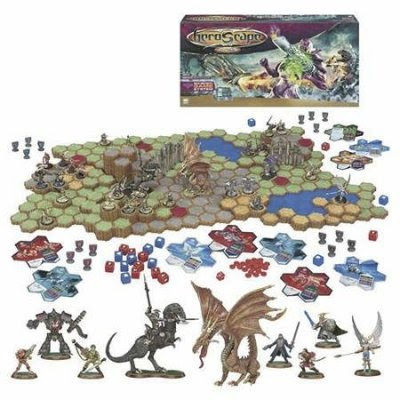 There are two "problems", however: First, it costs 3000 Czech Crowns. That might seem like absolutely crazy price because it can now be bought for $30 on Amazon.com (i.e. about 80% cheaper!!!). But remember, the box is huge and heavy and if you find an internet shop which ships HeroScape to the Czech Republic (hint: not Amazon), you'll have to pay enormous postage. It's up to you.

Second "problem": They only have one HeroScape in stock! Hurry, who will be the lucky one?
Posted by František Fuka at 16:37 1 comments

Sondra Prill appeared on local U.S. cable channel and gained quite a bit of notoriety recently, thanks to YouTube. Please enjoy many of her songs. Not for the faint-hearted or not-tone-deaf.

Posted by František Fuka at 13:02 5 comments

Lollipop From The Heart

Today, I got a lollipop. My sister delivered it. It was from her co-worker whom I never met. She supposedly thinks it looks like my dogs.

Heart-shaped lollipop from an uknown girl... Is this supposed to MEAN SOMETHING?
Posted by František Fuka at 21:02 4 comments

Please Do Something For My Physical Fitness

OK, I put this on my Amazon wish list. Now, who will buy it for me? (And the new bigger flat to put it in.)
Posted by František Fuka at 02:48 3 comments

This video is truly amazing. There's nothing new in it per se but I've never seen better answer to the burning question "What is this Web 2.0 anyway and why should I care?". You shouldn't care. The web cares automatically.

Posted by František Fuka at 21:41 4 comments

He Doesn't Sleep, He Waits

Finally, the legend comes to life.

Although I seriously doubt this project is currently much beyond the "trailer stage"...
Posted by František Fuka at 14:28 1 comments

This page contains rather skillful renditions of famous film director as Miis (Nintendo Wii avatars). The author even takes requests! 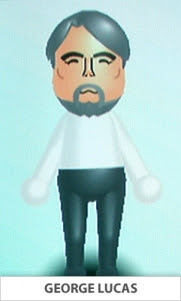 Posted by František Fuka at 23:22 0 comments

I've made some changes in my Google Reader settings. My "starred" feed is no longer public and instead, I created my public "shared" feed (notice "shared" / "starred" - two different things).

What does it mean?

If you want to read feed of interesting news I found (something like Stumbleupon, which I no longer use), just bookmark this page or use RSS feed which is included in it.

If you were already subscribed to my starred Reader items or to my StumbleUpon feed, delete these subscriptions (they are no longer accessible / updated) and replace them with the new one (see the paragraph above).

Sorry about the inconvenience but "shared" feed wasn't available when I started using Google Reader and I now have better use for "starred" feed.
Posted by František Fuka at 18:10 1 comments

This Is Some Funny Stuff, I Tell You!

Posted by František Fuka at 14:15 3 comments

Ghosts of the Underground

Turn off your lights and watch this "documentary" (I use the word "documentary" very loosely) about ghosts in the London Tube.
Posted by František Fuka at 01:30 1 comments