What He Really Meant Was...

I think it's irresponsible for my driving school instructor to alert me to the interesting fact that there are workers digging gasworks nearby by saying "Hmmm, gas" while we are waiting at the intersection. Just a thought...
Posted by Fuxoft at 12:59 7 comments

This is currently the #1 song in Japan. Helpful English subtitles provided...

I always liked girls between 20 and 25 years of age (and not just as sexual objects but mainly because they still know how to have fun with their life). I liked them when I was 20, I liked them when I was 30 and I like them now. The only difference is that, as time goes by, these preferences of mine seem creepier and creepier to the girls' parents. But the idea of me being with woman of almost half my age is not a product of my "rebellion against middle age and/or senility". I just prefer and always preferred these girls and my preferences didn't change during the last 20 years. Which might signal some sort of problem, but different kind of problem than most of you think.

However, after breaking up with Karolina and living wild for almost a year, I discovered what I subconsciously knew from the beginning (and dreaded a little bit): The feeling of having that one special woman in your life can be more satisfying than the possibility of having different hot/willing/flexible girl in your bed each day/week/month. I had several more or less bizarre ideas of how to make this work as painlessly as possible. For example, hooking up with a mature woman (maybe even with kid[s]) who perfectly knows what she wants from life and who will be grateful for what I can offer her. Another idea I tossed around was to hook up with very young girl who I can watch grow up into mature woman and teach her some stuff I like in a mature women while, at the same time, I'll hopefully grow out of infantility/puberty at last. And this is basically what happened, although in somehow different way than I'd plan it.

I first met Jitushka at the party amongst literally dozens of other people. Of course Jitushka was beautiful and was already flanked by several young gentlemen who either were her best friends or "wanted to be her best friends" or even "wanted to be her best friends without actually having sex with her" (which happens only to really cute girls). This, coupled with the fact that I was currently fed up with sex (yes, it is possible, at least temporarily) and didn't see Jitushka as anything else than cute little sex object, led to my ignorance of her, apart from a few good mannered words and three sets of Wii Tennis.

However, Jitushka gave me a very clear indication that she is interested in a little bit of private talk (where by "talk" I mean "talk"). We talked for about 20 minutes and then "talked" for about 5 minutes (where by "talked" I don't mean "talked"). This is when I became rather interested because I prefer to tell everything as it is, without any sidetracking, and I enjoy similar quality in the girl. During the following three days, we exchanged around 100 KB of text using instant messenger, asked each other a lot of questions (more about those later, maybe) and came to the only logical conclusion: Because we are both really twisted in very similar way, we'll try to start an "official relationship". Which is what we did on the fourth day. By the way, this means that I deviated from my usual modus operandi and started a relationship before I saw the object of my desire naked (although only by 20 minutes or so).

By now you might be shocked that I'm writing about these intimate details. However, the truth is, she started it on her blog (in Czech) and made me feel like a wuss who has to catch up with her. Which is the feeling I also enjoy (usually).

So, let me up the ante a little bit and tell you an intimate story from the first day of our relationship (which sounds like something from a sitcom). It's afternoon, we are lying in the bed, calmly talking about various stuff, when my phone rings. It's Ms. Iva, the editor of Cinema magazine, telling me something about my reviews for the next issue. While she's talking, Jitushka starts giggling.

Iva: "Oh my god, you pig. Has she at least graduated?"

And then we all had a good laugh. I'd say Jitushka was very much "in tune" with my kind of craziness from the beginning.

Of course, there were many people who dissuaded us both from having this kind of relationship, accusing me of being a pedophile and Jitushka of doing it for money. Which is not true. She does it for food.

And, of course, many of these "good friends" are absolutely certain that this relationship won't last. But they cleverly didn't give any specific timeframe so even if we break up in a month, in a year or in ten years, they can still claim they were right, the bastards.

I almost started searching for specific examples of some older man/younger woman pairs who lived happily ever after. But then it dawned to me that this is a trap. I don't really need to explain or excuse myself to other people for doing what I did. And I write all of this basically just because I want to be always able to remember how exactly it started and that I had no regrets when it started.

Plus, I don't want, under any circumstances, to have less outrageous blog than my loved one...
Posted by Fuxoft at 01:54 22 comments

In Soviet Russia, People Have Too Much Time On Their Hands

Someone from Russia (who has only the faintest knowledge of English) sent me a video recording of a complete play-through of my Tetris 2 game. It's over 4 hours long and he did it without any cheats, which I thought to be impossible (that's why the game insults you when you finish it). 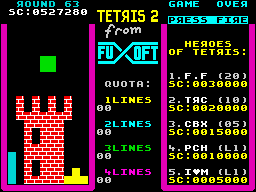 You can download the compressed video file here. It's only 15 MB long but beware: The RAR archive uncompresses to more than 4 GB of AVI!
Posted by Fuxoft at 08:32 6 comments

Something to make you feel much less gay:

Recently, I read reports about Firefox gaining significant market share among browsers, "even surging up to 28% share in Europe". Guess what, it's even more surprising with my servers!

Here are the statistics for the last month for my homepage (www.fuxoft.cz): Firefox has 43% share, more than MSIE!!

You can argue that www.fuxoft.cz attracts people who used to hack 8-bit computers, i.e. non-idiots who don't use MSIE.

The same can probably be said about this very blog (blog.fuxoft.cz) where the Firefox share is even higher, over 52%!!!

But how can you explain the statistics for FFFILM? That's my blog about movies (in Czech), whose visitors have nothing to do with Linux or Open Source. And yet, Firefox's share is 43%, again higher than MSIE's!!!

How can this be? The data is provided by Google Analytics and the sample is statistically very sound (hundreds of thousands of impressions).
Posted by Fuxoft at 17:35 8 comments

Love Is contagious. So Is HIV.

There is one foolproof method how to make a lady fall in love with you. Just give her HIV, like I did.

Taken for questioning to Třeboň, hopefully released on Tuesday...

She has killer smile, she is almost as crazy as me and the dogs like her.

She also lives 80 km from Prague and she is much (much) younger than me.

Also, she moves in mysterious ways:

By the way, yes, I thought long and hard about what all this means, and I really don't need your nuggets of wisdom about what could/will go wrong. I am rather happy. Thank you.
Posted by Fuxoft at 20:25 28 comments

Is Mr. Cotter Stark Raving Mad Or Just Some Sort Of Bizarrre Spambot?

I'm interested in buying an ad on: http://blog.fuxoft.cz/2007/04/ two-drunk-robots-in- 96kb-hungarian-pc.html for a website that provides help for people who are battling an alcohol or drug addiction. I can pay you $35 for this ad.

Please get back to me soon if you're interested!
Thanks,
Matt Cotter
Posted by Fuxoft at 01:33 6 comments