Of Burnouts and Warhawks

Those of you who are versed in the art of videogames might have deduced from my previous post that I now own Playstation 3. I'd probably bought it sooner if it wasn't for a single idiot from Slovakia who exalts Sony in such a mind-numbingly stupid way that it makes everyone hate all of their products.

But enough about J.o.e. I figured now is the correct time. The price has dropped under 10,000 Kč, it won't probably get cheaper too soon and there are some decent games available at last (GTA4 coming later this month!). And now that HD-DVD is dead, it's also probably worthwhile to own BluRay player. I also thought about installing Linux on it (which is officially supported) and using it as an Media center but it was surprisingly easy to use it as such without installing anything (on the PS3, at least). I just installed MediaTomb media server on my home server (which I already used to host audiovisual stuff), told it what directories to index, and - voilá - I was able to play most of my music and movies on my vanilla, unmodified PS3, over my home WiFi network (including DivX movies in very high resolution). There are only two problems: First, when playing very high-quality movies (e.g. 8 GB of Terminator 2), you can exceed the maximum available WiFi bandwidth. The more serious problem is that PS3 currently refuses to play anything that's over 2 gigabytes. It simply stops on the 2 GB boundary. Let's wait for the next firmware update and see...

Which brings us to the concept of firmware updates and network connectivity. PS3 (as well as my trusty old Wii) supports online purchases of downloadable content. When comparing the two, Wii immediately scores about minus billion points because of the simple fact that, even today, in April 2008, Nintendo officially doesn't support any online features for Czech residents!!! In order to use any of them, you have to set your country to "U.K.", for example. And it makes me think twice to enter my debit card details while supplying false address...

On the other hand, PS3 online shop works without problems even for Czech residents (albeit in English and rather slowly, even after the latest 2.30 firmware update) and offers many downloadable demos completely free of charge. Which is great because playing the few minutes of demo is enough to convince me that at least 80% of PS3 games are utterly meaningless for me and I don't ever want to play them again.

Which brings me to the games themselves:

I bought Burnout Revenge which looks and sounds great, has amazing sense of speed and adrenaline, online modes, but has completely botched the "Crash for $$$" part of the game. It's now ridiculously easy (and even boring) to keep crashing for dozens and dozens of seconds, getting millions and millions of dollars, mutiplied by "bus multipliers" which are dependent on the presence of buses in your vicinity (i.e. mostly completely random).

Apart from Elder Scrolls: Oblivion, all my other PS3 games are downloaded. I get much fun from simple "mini-games" like PixelJunk Monsters (clever twist on "Tower Defense" mechanics which even Jitushka likes and we play it together), Snakeball or Tekken 5 (with about 666 unlocked fighters, which makes it reduntant for me to ever buy another fighting game in my life).

I also bought and downloaded Gran Turismo 5 Prologue and, frankly, I don't understand the hype. Even when using very expensive (borrowed) G25 Racing Wheel (with pedals and shifter), the experience does not even remotely resemble the sensation of actual driving (in Škoda or otherwise). Also, the graphics - while looking better than PS2 or Wii, of course - can never be mistaken for photorealistic (if only because of numerous pixel artefacts at polygon edges, also the bystanders look extremely stiff). Also, while the driving model is supposedly extremely realistic, the best racing strategy is to ram opponents in the curves at the full speed, using them as driving guides (the opponents don't care and all cars are indestructible). Moreover, after installing the game, I found out that I can only play it when I am connected online and no other user registered on my PS3 can ever play it. The business model of Sony seems to be that when someone wants to play GT5 with his 3 sons, he has to pay for the game four times?!?!?! This was not mentioned in the agreement I clicked through when buying the game (it was corrected 2 days later), which allowed me to get full refund for GT5. Great. I returned the wheel and got Mario Kart for Wii.

However, the most amazing game - in my opinion - is Warhawk.

Ignore the notion that this game is somehow based on decades old 8-bit shooter with Rob Hubbard soundtrack. This is a classic multiplayer multi-vehicular carnage reminiscent of those we know from PCs, except that this one is designed from ground up to be played on the console, using the console controller (no mouse or keyboard), thus making the playfield level for everyone.

The most amazing thing about Warhawk is how balanced everything is. You've got about half a dozen personal weapons, jeeps, tanks, turrets, jets (with another half a dozen weapons) and motherships, and yet nothing seems to be superfluous and everything is useful, allowing for multitude of wildly different strategies. For example, knife if definitely less useful than a pistol, but it kills in one hit and you are invisible on the radar when you equip it.

The interesting thing is that Warhawk does not have any single player mode. There are no scripted missions and no bots. If you want to kill someone, you must kill other living beings. Of course, when you first try to kill someone, it's probably someone who already killed many others and you get majorly pwned in a fraction of second. This is all part of unique Warhawk experience. I now played the game for many, many hours, and yet I still often just sit behind the crosshair of stationary missile turret and shoot down occassional jet, whose pilot doesn't expect that someone could actually be sitting in that boring turret, waiting for his chance, hahaha. Only when the odds are favoring my current team, I get bold and try my hand at driving, flying or hand-to-hand combat. And I've observed many, many wildly different tactics, getting killed in many brutal ways, and experiencing the rush of my first sniper kill at the distance of 1 km or so or first shooting down the mothership with 7 enemies inside.

I see that (based on the available ranks and the ranks and medals I actually obtained) I am still worthless shit but I have unmistakable feeling that I am slowly but surely getting better.

As for the Wii, Mario Kart is great fun, No More Heroes is super-bizarre but Geometry Wars Galaxies is the greatest thing ever.
Posted by František Fuka at 23:05 9 comments

My car is now fixed and as a consequence of the crash, it now has the exactly same color scheme as Albert! 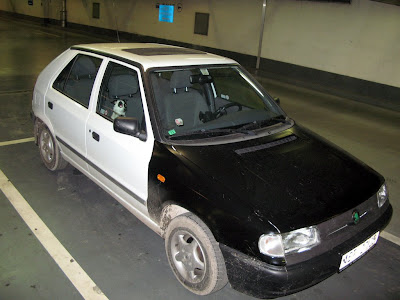 Posted by František Fuka at 14:39 9 comments