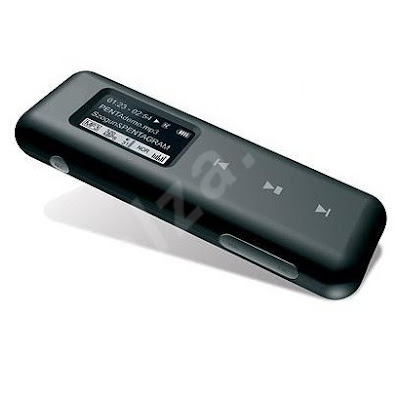 (Image stolen from Alza.cz)
I'm afraid it's strictly downhill from here on.
When I copied about 6 GB of music to the device, the start-up took about 50 seconds! I thought this was because the device indexed my music and cached the song data somewhere but no such luck. The delay is the same for each and every start-up! EM270 also supports microSDHC cards up to 32GB for potentially 40 GB of total storage which could mean several minutes of start-up time each and every time (in theory - I haven't tried it).
All of my music contains ID3 v2.3 tags with artist, track number, genre, album and track names. EM270 allows to me to select music using these tags (meaning the songs actually are indexed using these data). However, when I actually start playing the tracks, only their filenames are displayed. Nothing else. Not even the playing time. This means that when I randomly skip between 500 music tracks, there is no way to see the album and composer details for currently playing song! If your files are named "01.mp3", "02.mp3" etc. then tough luck, you have no way of knowing which song is currently playing.
Setting play method to "Shuffle" means that tracks are played in random order, with no regard to what was already played during this session. That means you can shuffle through 20 track album and hear track #13 four times before you hear track #7 for the first time, for example.
The manual is godawful. It's in Czech and English. The Czech version is briefer and totally omits some menu items while the English version is almost incomprehensible and all screenshots are in Chinese! I was able to discover most of the functionality by trial and error. However, there is an item called "JumpSetting" with different time values in the Settings and I have no idea what it is supposed to be doing. The manual actually contains the following gem:
"This user manual can give you some useful information. Hope it will help you to operate the player well when you are using it. If there is any mistake on this manual, you are welcome to figure it out."
Obviously, I didn't try out all the functionality but from what I've seen it was quite clear to me I don't want to use EM270 for my music playing needs. Some UI choices were very bizarre, for example holding down the Play/Pause button started changing the dozen or so equalizer settings very quickly (i.e. 10 times a second), resulting in a game of roulette of sorts.
If I bought this player for myself, I'd be rather pissed off. However, it will be OK for my father and I'll keep my trusty Sansa Clip. Fun Beat actually seems to be Czech company but their firmware and documentation resembles the worst Chinese crap.
And remember: "Our company remained the final right how to explain for the manual, warranty and some related information."
P.S: This mini-review is based on latest available firmware.
Posted by Fuxoft at 02:16 8 comments

I purchased Buzz! Quiz World game for PS3. This is a TV-Show style quiz game which has the distinction of being fully localized to Czech language. Not only translated, but there are also many questions about Czech TV shows, Czech sports etc! There are supposed to be over 5000 questions in total, some with audio and / or images.

I only played one game so far and it was excellent fun although I only found ONE online opponent (you are matched only with Czech players and the game is brand new over here) so we only played one-on-one instead of up to eight players which this game supports (online or locally).

I am rather sceptical about the quality of Czech game translations and I was nervous about this game because, in this case, bad translation could easily ruin the whole experience. Thankfully, the translation (and localization) is rather good, although not perfect.

For example, the announcer calls you by your name (provided you have some sort of "regular" Czech name). Unfortunately, instead of "Františku", the announcer called me "Františ..." the whole time, with abrupt fade-out on the last syllable. Perfect example of less-than-stellar localization quality control.

I won my first game because I was able to choose the category "Movie Quotes", where I trounced my opponent (he trounced me in "Current TV"). And out of the 10 questions in this category, two of them were not exactly right.

The first question was about the quote "Frankly, my dear, I don't give a damn". In Czech, this quote was written as "Vážený, to je mi jedno", which means "Dear SIR, I don't care", although this is said TO A WOMAN in "Gone with the Wind". Although the title of the movie was translated correctly as "Jih proti Severu" ("South vs. North") - yes, that's official Czech title. It's clear the translator didn't know the correct context for this scene and it's also quite clear most of the quotes were translated differently than in the the actual Czech versions of these movies.

The funniest "glitch" was the question about the quote "May the Force be with us" with "Armageddon" and "Star Wars" being offered as possible answers. Obviously, the correct answer is "Star Wars" but my opponent has chosen "Armageddon" and lost. The funny part is that in Czech versions of these movies, this phrase ("Ať nás provází Síla") actually appears in both "Armageddon" and "Star Wars"! And the funniest part is that it's because of me - I used "May the Force be with us" as a substitute for "Beam me up, Scotty" when I translated Armageddon many years ago (Star Trek - especially the original series - being virtually unknown in our country back then). This "error" is obviously almost impossible to discover and fix before the game's release but it certainly made my day.

As I already said, I had great fun playing the game and I cannot wait to try it with more people. And the Czech version does not suck. This is definitely perfect party game, even for non-geek people who usually wouldn't touch videogame controller.

P.S: Four "buzzers" (special controllers) are included with the game and I see no reason why I have to buy more buzzers for more players and why I cannot use standard PS3 controllers for players 5 and 6, for example...?
Posted by Fuxoft at 22:51 7 comments