Another stop during my investigation into MMORPGs: Maple Story. This is an amazingly popular MMORPG supposedly with over 50 millions of players worldwide! In contrast, World of Warcraft "only" has about 8 million players. So why did you never hear about it? Because it's originally Korean and was only released in English about a year or two ago (after already being a hit in other Asian countries).

What's interesting is that Maple Story has deliberately pixelated hand-drawn ("8-bit retro") graphics and the game is presented as 2D side-scroller (also very "8-bit retro"-ish). In other words, it's exceedingly cute and clean, with no bothersome 3D controls.

It's fairly standard fare. You have to download about 500MB client (Windows only!) and then kill hundreds and thousands of monsters in what basically looks like cute shareware scrolling game. There are all the usual shops with equipment, teleports, leveling up, special events etc...

You can play for free but if you want to own a virtual pet or some extra special equipment, you have to pay in cash.

The problems: Some English texts look awkward and have errors in them. The instructions are sometimes insufficient. For example, I didn't know that there are different worlds and your character cannot be moved from one world to another. That means, after I reached level 16 (after 15 hours of playing) in the "Bellocan" world on "Maple Global" server, I discovered that my friends are in fact playing in different world and if I want to meet them online, I have to start playing in their world, with a different character, from scratch. The different worlds seem to be completely similar in their contents. They only exist in order to handle the amazing number of people playing. And still, some locations seem rather crowded (and this is in the newest, the least populated world).

Again, as with Second Life, I don't expect to devote my life to this game. But if you don't know what to do with your spare time and you like big-eyed pixelated sprites, you might give Maple Story a try.

By the way, if you enjoy larger pixelated things for your apartment, you might enjoy www.pixelblocks.com.
Posted by Fuxoft at 18:35 0 comments

Wow, I love my Chucky but it seems someone has taken his love for Prazsky Krysarik (Prague Ratter) much farther and created a homepage for his! Not to mention that he took his dog to China with him. Check out especially the photos.
Posted by Fuxoft at 15:58 4 comments

Having more than enough experience with First Life, I signed up for Second Life, just out of professional interest (I never tried it before). 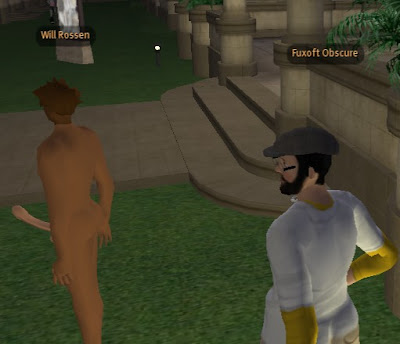 Yes, I Love my Computer

According to "independent research by Kelton Research", 65 percent of consumers are spending more time with a computer than with their significant other.

Of course this is true for me now, but it was also very much true before Karolina left. I am certainly spending much time with my computer but if I had to use pen, paper, typewriter, watercolors, photo studio and analog recording studio for the stuff I do on my computer, would it then make me a better man? I would then have less time for my s.o. because, without computer, all that stuff would take me much longer"

So, yes, I am guilty and I don't consider it too bad. Would you consider alarming the fact that most people spend more time using electricity than using their significant other?
Posted by Fuxoft at 19:12 1 comments

Today, Kryspin left to live with Karolina. Bye bye, Kryspin. I know that you waited for the right moment to kill me. Tough luck. 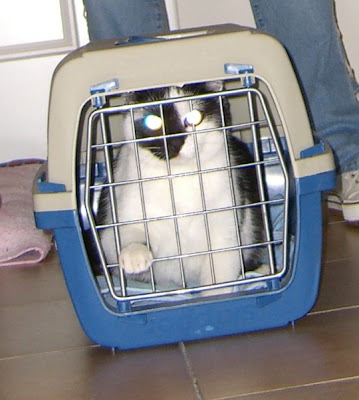 If you are reaching into the fridge for the tube of special balm to squirt into your dog's sore eye, be extra sure you pick up the right tube. 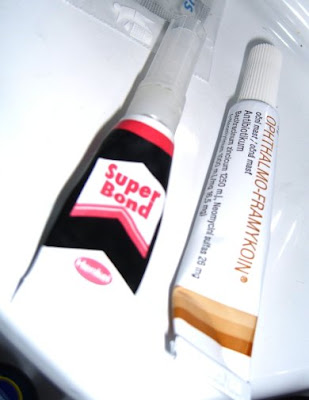 Video from the front

Fantasy Flight Games (creator of some great boardgames, usually with excellent components) has come up with a novel way to advertise their games. Instead of trying to explain the intricacies of their innovative game mechanics of Tide of Iron using text and pictures, they resorted to video. This looks great and more "serious" boardgame companies should do this.

Also, this screen capture is worth thousand words: 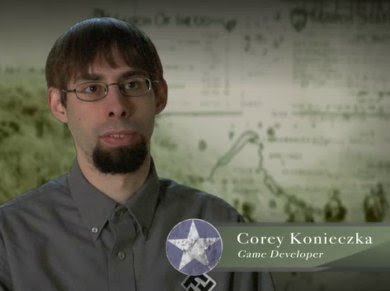 The day after The Day After Tomorrow

I don't have to be an Al Gore fan to see that global weather is seriousely messed up and Mother Nature is getting seriously pissed.

In the last few years we had several critical floods, including the "500 year water". This year, the winter didn't come. No snow, high temperatures. Some trees are getting confused and started blooming. During the last few days, hurricanes. New record windspeeds. Three days ago, I was really afraid the wind will knock out our giant windows and the glass will kill me painfully. This is how the Stromovka park looked yesterday (click to see neighboring Flickr photos). There were dozens of ancient trees like this }stromovka was already ravaged by the flood a few years ago):

I am not optimist and I don't think this can be easily fixed even if all the governments immediately started cooperating on fixing it (which won't happen, of course). We probably have several years or decades of fairly carefree life left but we should start looking for other planets to fuck up pretty soon, I think.
Posted by Fuxoft at 17:58 4 comments

Kryspin knows how to hide

And I thought I left him on the balcony in that awful storm...

Please someone kill that man!

I am not alone

Imagine the scene: Metro train, almost midnight, mostly drunk and sleeping people. And me, playing the latest Castlevania on my Nintendo DS.

I am usually oblivious to the fact that 38 years old guy playing videogames in Metro might seem weird to people. This time, however, something was different and I felt the people were really staring at me. I still didn't care.

Only when I got up to leave the train I saw the whole picture. An older gentleman sitting three seats to my left was furiously racing on his PSP...

Actually, it's not his shit. He prefers human feces. Sniffs it, tastes it and then, unless I'm quick enough, he rubs his face in it. Nice one, Albert! Do you have any idea what I have to do with him afterwards, in the bath?!

When you are older and have a beautiful, intelligent, teenage daughter, be sure not to buy the completely inappropriate present for her!
Posted by Fuxoft at 22:34 6 comments

There is an interesting new RPG game for Windows called Super Columbine Massacre. It's freeware. 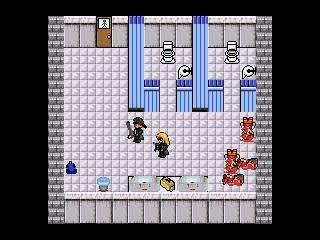 It uses the retro 8-bit-like RPG engine (in fact, it was created using RPG Maker) and allows you to experience the killings at the Columbine High School and the events that followed (going to Hell, meeting Pikachu, Santa, Nietzche and Satan, etc.) from the perspective of two young killers.

I'd probably be interested in the game in any case because ANY game about Columbine massacre has to be super-bizarre, but this one is also interesting social, political and/or artistic statement. If you don't own Windows or if you suck at RPGs, you can see the whole game being played (and finished) here:

The sensation of seeing cute 8-bit sprites re-enacting situations and dialogues from that fateful day is something you don't experience often in the videogames...
Posted by Fuxoft at 19:53 0 comments

This is an expansion of this idea...

The second attempt is here. He really doesn't seem to enjoy it very much, I guess he won't be winning any Oscars for cinematography.
Posted by Fuxoft at 16:26 10 comments

I just finished translating The Fountain and it was hard. There is not much dialogue in the movie but it's made complex by the fact that same dialogue is repeated in different scenes, sometimes with slightly different meaning. Also, let's face it, it's not clear what is happening in the movie and if, in fact, some of it is "happening" at all...

What you probably know even if you didn't see the movie is that Rachel Weisz and Hugh Jackman both play three different characters with similar sounding names - from 1500, 2000 and 2500. This is stated in the trailers and in the press materials. I think even this is not that simple. [Spoilers in the rest of this paragraph, if you didn't see the film.] My interpretation is that the only stuff that is really "happening" are the scenes from year 2000. Everything from 1500 is taken verbatim from Izzi's slightly abstract book (it definitely isn't historically accurate AT ALL) and everything from 2500 is taken from the last chapter of the same book which Thomas finished at Izzi's request shortly after her death. 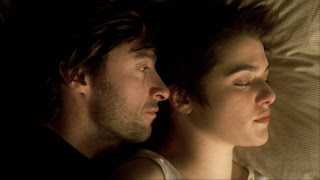 I am sure there are many more interpretations possible and I even had conversations with the subtitle editor (whose real name is "Anna Karenina"!) about what the sentence "Death is the road to awe" (repeated three times in the movie) means. She thought "awe" stands for "humility before God", I thought it means "something amazing". And I don't think either one of us is stupid or doesn't understand English.

This is a complex film that generates some powerful feelings in the viewer. But I am not entirely sure what exactly those feelings are. What is certain is that love is a many splendored thing and if you love someone, it might be nice to be with him forever.

But I am not sure this is exactly the kind of message I need to hear right now.

"The Fountain" is being released in the Czech Republic in March 2007.

P.S: After much deliberating with Anna, we settled on "road to greatness".
Posted by Fuxoft at 01:24 7 comments

What's that on Albert's back?

It's a nice photographic tripod from Joby called "Gorillapod", whose legs are firm yet flexible and can be e.g. wrapped around any tree branch or railing. There are three sizes available (Albert is wearing the middle one) and while it's not exactly "small", it's extremely lightweight (and can be folded into any position when carried)! Just what you need for those unplanned night shoots.

Gorillapod can already be bought in the Czech Republic.
Posted by Fuxoft at 11:26 4 comments