I like it when someone tries to solve long-standing problems using completely fresh approach. I also like electronic gadgets and I am not afraid to learn new skills in order to use them. For example, I consider Fingerworks Mini to be an amazingly useful and visionary product and I am very sad Fingerworks is out of business.

It's only logical I was intrigued by Orbita Mouse from Cyber E Sport when I wanted to replace my trusty old Logitech mouse. Orbita Mouse tries to do some established stuff in a radical new way so it's vitally important you understand the concept well:

The mouse itself is shaped like a puck. On its top side, there are two buttons - round one and a triangular one. You can click the top of the puck (apart from the two buttons, the rest of the top side is one giant button). The sides of the puck can also be pushed and act as a button. 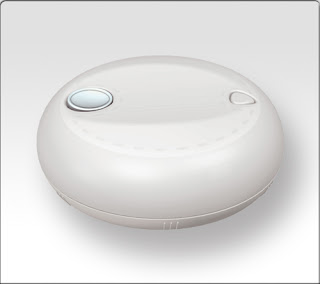 The mouse operates wirelessly and communicates with its receiver (which is also a recharging station) using WiFi. The receiver is connected to your PC using standard USB.

Using the included (Windows-only) software, the mouse can be configured to do various things. I'll try to explain the default setup, which I found to be most useful (although you can have several different mouse profiles, you can only switch between them using the Windows application).

The triangular button is only used for mouse calibration (this is a big mistake because you won't be using it during your normal work and it only gets in the way and you'll find out you keep pressing it involuntarily instead of pressing the main "top" button).

You move the mouse on your desk as with any other laser mouse. The selling point of Orbita mouse is the fact that it detects when you rotate it and translates this rotation to mouse or keyboard events (by default, rotating the whole mouse left or right translates to rotating mousewheel up or down). This also means that it doesn't matter which way the mouse is orientated. When you move it away from you, the mouse arrow moves up, regardless of how the mouse is rotated (that's why you must re-calibrate the orientation each time you take the mouse to different location).

Pressing the top of the puck works as a standard left-click. This button is very sensitive so you cannot actually rest your palm on the mouse. The problem is, you'll often be pushing one of the two buttons (round or triangular) instead of the main "top" button.

Pressing anywhere on the side produces standard right-click event.

The round button on the top acts as a sort-of Shift button. Its default function is to switch the rotation effect between horizontal and vertical scrolling.

From the technical standpoint, the Orbita Mouse works perfectly. However, there are some important flaws in this whole concept which made me wonder what exactly the designers hoped to achieve when they came up with this concept.

First of all, the mouse moves really effortlessly, almost as if it was the puck in Air Hockey. This is unusual at first (that's why beginners should first use the interchangeable "beginners' ring" which has more friction and then move to the "normal" floating ring) but after 10 or so hours I grew accustomed to this and I really liked this smooth, floaty movement.

However, there are some important problems because of this smooth movement. For example it's not always easy to rotate the mouse and operate its buttons without involuntarily moving the mouse (and thus the mouse cursor on your monitor). The worst offender is the right-click key. Ideally, your should be able to perform a right-click by pressing anywhere on Orbita's side. But in reality, the side is not a single circular button but three buttons, each of them covering slightly less than 120 degrees, thus leaving three rather large areas which cannot be clicked! This means than when you press the sides of the puck, you cannot be sure if you are pressing the button or if you are moving the mouse. This is made even more problematic by the fact that the mouse rotation constantly changes during the standard use so you cannot really know where exactly the three "blind spots" are currently located without visually checking mouse's current orientation.

The rotation itself is very useful for quickly scrolling through long documents. However, it's maddeningly inefficient when you want to scroll by exactly one step. That's because you have no idea how far you have to rotate the mouse for the next scroll step to be generated. When I tried using the Orbita Mouse for zooming in and out in GIMP, it was almost unusable because I always either zoomed too far in or out or didn't zoom at all.

It's very difficult to use Orbita Mouse quickly and it's absolutely impossible to use it in action games that require pressing the mouse button(s). That's because you really cannot press any of the mouse buttons (and/or rotate the mouse) and move the mouse at the same time with any usable precision.

I spent about 40 hours using Orbita Mouse and after about 30 hours mark, I stopped improving. I could operate it but almost everything felt more cumbersome than standard mouse. The only highlights were scrolling through large documents (fast scrolling, not precision scrolling) and playing Flash games that don't require mouse presses.

That's why I returned the Orbita Mouse and bought myself Logitech G9x which I can wholeheartedly recommend. It's advertised as "mouse for gamers" but it works perfectly for all my needs and stores up to five profiles locally (in its own memory) so that you can switch between them without need for any special driver, under any operating system!

Also, if the makers of Orbita claim that their mouse is "3D" (while it actually has only three buttons and one scrollwheel), the G9x with its scroll wheel, tilt wheel and 7 programmable buttons should probably be called at least "5D".

Thanks to Alza for lending me the mouse.
Posted by Fuxoft at 21:02

Nice review. Have you tried it on the Linux?

Yes, it works flawlessly under Linux except for the profile switching, of course.